As the founder Pietro Giuseppe Redaelli (1886-1971) relates in his memoirs, in 1927 he decided to switch from banking to starting his own business: “I received several proposals, but I preferred the proposal of my friend the accountant Severo Piatti who invited me to take over the printers Feltro e C., which had just shut down.

I remembered that I had a good knowledge of printing because when I was at the Collegio Volta school in Lecco, I met Monsignor Schiatti, the founder and editor of the Catholic weekly ‘Il Resegone’, which was widely circulated in the Brianza area.

He often asked for my help as a proof reader, typesetter and also as a commentator on social issues: it was my hobby when I was young and gave me experience at a young age.
As I had for years wished to have my children working alongside me I decided to acquire it and was assisted in this by the kindness of Mr Franco Roncari of Gemonio. It was agreed that my generous friend, whom I had not known until then would work alongside me until I was able to buy his share in Feltro e C.

– We all need to earn an honest crust, so let us all get to work with God’s help! –

It can be easily appreciated that Varese was not well disposed to me because too many competitors made predictions about me that even if they were not sinister were not very pleasant; but to help my little family I felt like a lion and was determined to succeed.

Varese kept me busy for only a short time and only with small orders. We needed to bestir ourselves so every week I went to Milan twice to make sure I had enough work. 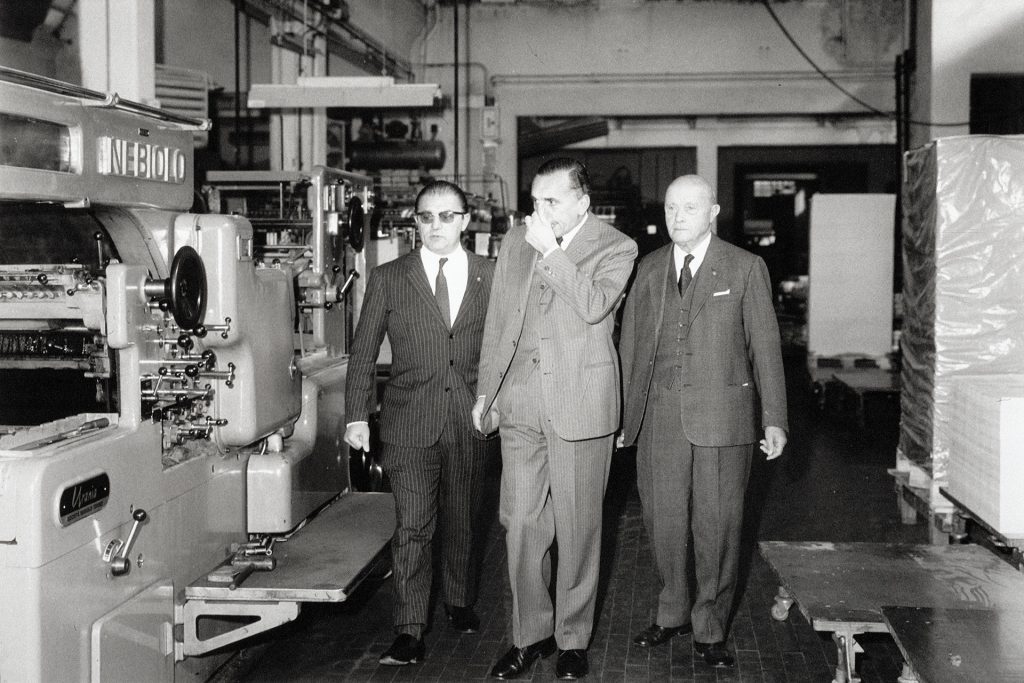 My first big customer was the publishing house Casa Editrice Corbaccio owned by Mr Enrico dall’Oglio, who remained an unforgettable friend and with whom I forged close bonds in our mutual interest.

In Milan I found many other friends in the different publishing houses who were kind enough to give me considerable work that was done smoothly and with a spirit of sacrifice in order to be able to survive and make make our mark as effectively as possible.

It was on one of my trips to Milan that I met my old friend the politician Achille Grandi of Como.

– Hello Achille, what brings you to Milan? It’s really good to see you. And how’s Maria, your wife? – I asked him.

– You know what happened in Rome, when the Fascists took over. I was advised to lie low somewhere with my wife Maria. We are living in Milan until we can settle down somewhere.

– I have found a house in Varese where I own a printing works that has been running for a few months now. I remember that you were something of a celebrity in the printing industry. Couldn’t we work together? I guarantee we’ll make a go of it to our mutual advantage. –

Just a few days latter in Varese his wife Maria and I soon came to an agreement to appoint a works manager.

He remained with us for about seven years and provided great assistance and brought with him his reputation as an indefatigable and honest worker in everything he did until one day, very gently, but much to our mutual regret, he came to say goodbye to my family because he had decided to go to Rome, whatever the risk to again take up his position in the Catholic workers’ organizations.

After a few years, I also reached retirement age and as I was satisfied that I had managed to give the fine city of Varese a company that did not detract from the many magnificent companies that were the fruit of the diligence of the people in the area, I entrusted my work to my son Ernesto who, having worked alongside me for over twenty years, had for a long time been my deputy.

His work was invaluable and enabled him to move ‘La Tipografica Varese’ to via Tonale 49 (in 1959) where he was able to provide a living for many large families.

At present [November 1967], after many sacrifices and various restarts it can be considered to be an organization that is envied for its complex and modern equipment that is geared to all work challenges”.

GO BACK TO THE STORY